Week one of Donald Trump’s presidency was week three of winter quarter for most of the University of California. Even as students were signing the covers of exam books for early midterms, the president was busy with executive orders moving forward with Keystone XL and the Dakota Access Pipeline, commanding the construction of the border wall and banning refugees from entering the United States.

For the next few weeks, Westwood grumbled. Elementary school students from the UCLA Lab School marched around campus with their families. Students walked out of classes and joined a crowd of over 200 protesters on Inauguration Day. Two student government offices funded buses to take students to the Women’s March in downtown Los Angeles. Someone posted advertisements for the white supremacist group American Vanguard; someone else tore them down. The “alt-right” was mocked.

UCLA’s Bruin Republicans celebrated Trump’s inauguration, but they may have been feeling pressure from the near-constant demonstrations around campus. On January 23, the club canceled an event scheduled for early February at which former Breitbart editor Milo Yiannopoulos was to speak. In a letter shared on the group’s Facebook page, leaders cited an inability to “accommodate the long list of requirements” Yiannopoulos and his team provided. They also referred to recent protests at Yiannopoulos’ events on other college campuses, declaring that students’ and attendees’ safety was their primary concern. Over a thousand Facebook users had indicated that they were prepared to protest Yiannopoulos’ appearance but, thanks to the cancellation, that demonstration never got off the ground.

On other UC campuses, things played out differently. A week earlier, Yiannopoulos was set to speak at UC Davis alongside pharmaceutical executive Martin Shkreli. Protests outside the campus venue forced the Davis College Republicans, also referencing safety concerns, to cancel the event only half an hour before it was set to begin. Reports of property damage circulated but were refuted by campus police, and no physical violence occurred.

At UC Berkeley, it was rougher. On the evening of February 1, the night Yiannopoulos was scheduled to speak, 1,500 protesters gathered on campus. The demonstration veered quickly toward a riot as a smaller group joined a larger, peaceful crowd and began throwing rocks. The agitators set barricades on fire and smashed windows, starting fights and threatening nearby Trump supporters. Yiannopoulos’ event was canceled, and Trump lashed out, tweeting, “If U.C. Berkeley does not allow free speech and practices violence on innocent people with a different point of view —NO FEDERAL FUNDS?”

The tweet raised eyebrows among students, administrators and onlookers — could Trump really defund a UC campus, or possibly the system as a whole? The answer, in short, is no. According to the university’s current operations budget for the 2017-2018 academic year, federal funding made up less than 10% of the previous year’s budget. This sliver of funds went toward research contracts, grants and facilities; financial aid for students; and Medicare and Medi-Cal at UC medical centers. Without federal appropriations, the UC system would need to adjust, but tuition, medical revenue and state funds would allow operations to continue.

Regardless, there is a pervasive sense of disquiet on UC campuses. Students worry about their health care, the environment, the travel ban in all its modifications. The UC Office of the President, headed by former Homeland Security director Janet Napolitano, recently issued guidance for international students and faculty from the six countries affected by Trump’s revised executive order on entry to the United States, which the office called “anathema to advancing knowledge and international cooperation.” Many of these students, along with their undocumented peers, must now decide between being able to pursue their educations in America or visiting their families and homes abroad.

Undocumented students face still greater stress. Students currently protected under President Barack Obama’s Deferred Action for Childhood Arrivals risk deportation if Trump discontinues the program, as many of his supporters demand. In February, UCLA students met with legislators and staff in Washington, D.C., on a trip led by the Undergraduate Students Association Council’s external vice president, Rafi Sands. Students visited both Republican and Democratic offices, and Sands praised a DACA student who shared personal stories that helped make immigration issues tangible, especially for those who had never met an undocumented student before. Asked about moving forward, Sands said, “My goal for the entire campus is to work harder to share these personal narratives and lived experiences. It’s increasingly important for students to share their own stories, rather than lobbyists and staff sharing on our behalf.”

Since those tumultuous weeks of February, an uneasy calm has settled over UCLA’s campus. Once-abstract issues have been made all too real, yet the quarter system moves on. Most students have laid down homemade protest signs and returned to classrooms, labs and libraries, but many in Westwood seem to be waiting, both nervously and defiantly, for the Trump administration’s next move. 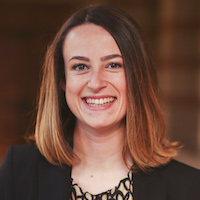 Katherine Molyneux is a Bay Area native and a Political Science and Communication Studies double major at UCLA.